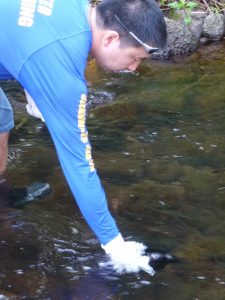 In order to address data gaps identified in the 2013-14 DOH/DOA surface water study and fulfill community requests for additional monitoring data, DOA has entered into a Memorandum of Understanding with United States Geological Survey (USGS) for a $500,000 surface water quality study.

Surface water on Oʻahu and Kauaʻi will be sampled for pesticides before and during storm events to evaluate whether pesticides are moving offsite at unacceptable levels.  Different land uses including, urban, rural, and agricultural will be evaluated. Interim results will be released after the first year of the project. DOH is acting as scientific and technical advisors to the project. DOA has committed to an additional year of sampling in all four counties, building on the results gathered in 2016-17.

The following spreadsheet provides raw data from the 2013-14 Statewide project.