Gonococcal Susceptibility to Cephalosporins – Hawaii, 2003 to 2011
Neisseria gonorrhoeae has progressively acquired resistance to many of the antimicrobial agents that were previously recommended for treatment, including sulfonamides, penicillin, tetracycline, and fluoroquinolones.  Consequently, these antimicrobials are no longer recommended for treatment of gonorrhea in the United States. Read more >>

Public Health Laboratory Workforce Outreach in Hawai‘i: CLIA-Focused Student Internship Pilot Program at the State Laboratories
The Hawai‘i Department of Health’s State Laboratories Division (SLD) suffered from chronically vacant positions even before the national economic crisis that began in 2008. From 2008 to 2010, the nation lost 19% of its government public health workforce – approximately 44,000 jobs.1 During the crisis, Hawai‘i Department of Health lost vacant positions, conducted a reduction-in-force, and furloughed employees for 2 days a month. The SLD was not spared, losing 15 positions in 6 months while responding to the influenza A pandemic caused by pdm(H1N1),2 which was only possible due to integrated laboratory preparedness throughout the state.3 The challenges facing Hawai‘i’s public health laboratory workforce are not unique, but are compounded by geographic isolation. Both California4 and Wisconsin5 recently issued reports documenting problems in their states. Health System Change,6 the American Public Health Association,7 and the Association of Public Health Laboratories (APHL)8 have all reported employee shortfalls at the national level.  Read more >>

The Current Status of Laboratory Diagnosis of Angiostrongylus cantonensis Infections in Humans Using Serologic and Molecular Methods
Angiostrongylus cantonensis is a leading cause of eosinophilic meningoencephalitis. Angiostrongyliasis is often suspected when eosinophilic pleocytosis is observed in cases of acute meningitis, particularly if accompanying risk factors, such as residence or travel to an area known to be endemic for the parasite, are also present.1, 2 A more conclusive diagnosis can be established by direct observation of the parasite in cerebrospinal fluid (CSF) or by using laboratory tests specific for Angiostrongylus-specific antibodies or parasite DNA.  Read more >>

Biomonitoring for Phthalate and Arsenic Exposure in Hawaiʻi
In a concerted effort to battle a myriad of diseases associated endocrine disrupting chemicals, we have focused our efforts on two sources of concern; phthalates and arsenic. It is possible that Hawai‘i’s residents may be at increased risk to phthalate exposure because products have usually been packaged for long distance shipping, and are often
stockpiled for long periods of time, allowing for phthalates to leach from packaging into consumable products. We have collected de-identified clinical samples stratified by age and sex to examine for phthalates and their metabolites, however those data are too preliminary to report. Consequently, the biomonitoring focus of this poster is on long-term and overall arsenic exposure of a small sample of O‘ahu residents by measuring the total arsenic (As) concentration in toenails and urine.  Read more >>

Omega-3 Fatty Acid, Selenium, and Mercury Content of Aquaculture Products in Hawaii
Numerous health benefits have been associated with increased dietary intakes of long-chain omega-3 fatty acids. Dietitians recommend consumption of at least two 4-oz servings of fish per week. Fish is the major source of selenium and long-chain ω-3 fatty acids but can also contain methylmercury. Dietitians recommending fish intake need to be familiar with omega-3, mercury, and selenium levels in commonly available fish in order to make recommendations that maximize benefits and minimize risks. The purpose of this study was to gather baseline data on the fatty acid profile and selenium and mercury concentrations of aquaculture products in Hawaii.
Read more >>

Hazardous Metals in Ambient Air Due to New Year Fireworks During 2004 – 2011 Celebrations in Pearl City, Hawaii
Honolulu, Hawaii, has consistently recorded the cleanest air among large U.S. cities, except once a year during New Year celebrations, because of traditional fireworks displays statewide. Read more >>

Hawaii’s Unique Public Health Challenges: Rat Lungworm
One of the best perks of living in a tropical climate is having access to fresh produce year-round. However, a rare disease called rat lungworm has recently gained the attention of the medical community in Hawaii and elsewhere, and may make you think twice before you chop up a head of lettuce from your home garden.
Read more >>

Hawaii’s Unique Public Health Challenges
When I first came to Hawaii on a CDC/APHL Emerging Infectious Diseases Laboratory Training Fellowship grant, I had the common misconception that everyone spends their days surfing, drinking Mai Tais, and lounging on the beach. But while there are certainly many perks to living here, another truth rapidly becomes apparent: Hawaii is not for wimps. Read more >>

Neisseria gonorrhoeae With High-Level Resistance to Azithromycin: Case Report of the First Isolate Identified in the United States
We report on the first Neisseria gonorrhoeae isolate in the United States identified with high-level resistance to azithromycin. This report discusses the epidemiologic case investigation, the molecular studies of resistance-associated mutations and N. gonorrhoeae multiantigen sequence typing, and challenges posed by emerging gonococcal antimicrobial resistance. Read more >>

Pandemic Preparedness in Hawaii: A Multicenter Verification of Real-Time RT-PCR for the Direct Detection of Influenza Virus Types A and B
More than 200,000 people are hospitalized from influenza complications, and about 36,000 people die from influenza in the United States each year. Influenza infection is primarily transmitted person to person by respiratory droplets, and symptoms are typically observed after incubation of one to four days. Symptoms commonly include fever, sore throat, dry cough, headache, myalgia, malaise, and/or anorexia. Read more >>

Characterization of Leptospira Isolates from Patients in Hawaii Using Molecular and Serological Techniques
Hawaii has the highest incidence of leptospirosis in the United States. Leptospirosis in Hawaii is a reportable disease, and isolation of the organisms from patients is used when possible to make a definitive diagnosis in conjunction with serology. However, full characterization of the isolates has not been routinely performed. Read more >>

Use of PCR and Electrospray Ionization Mass Spectrometry (PCR/ESI-MS) for Identifying Infectious Disease Agents of Leptospirosis Where Standard Methodologies are Inadequate
Current microbiology methodologies for the detection of selected infectious disease agents are often limited in both turn-around time and test performance. Timely identification of bacteria, fungi, viruses, and parasites is of critical importance for optimal patient care. This study describes the usefulness of using PCR/ESI-MS in detecting Leptospira spp. Read more >>

Direct Detection of Influenza Virus Types A and B in Clinical Specimens During the 2007/2008 Respiratory Season: Antigen vs. PCR
The rapid and specific detection of influenza virus during the respiratory season is critical for optimal patient management. Antigen-based testing is often used at the point of care to obtain the best turn-around time. However, these screening tests vary in their test performance and the ability to detect both influenza type A and B efficiently. Read more >>

Improved Recovery of Outbreak-Associated Escherichia coli O157:H7 from Farm Environmental Samples in Hawaii Using Recirculating Immunomagnetic Separation System (RIMS)
A novel use of the Pathatrix Recirculating Immunomagnetic Separation System (RIMS) coupled with optimal enrichment conditions was demonstrated in the recovery of low levels of E. coli O157:H7 from leafy produce, Moore swabs and surface water samples during the 2006 trace-back investigations in California. The recovery of E. coli O157:H7 from highly suspect materials using the standard U.S. Food and Drug Administration Bacteriological Analytical Manual (BAM) method proved to be difficult in the early part of an E. coli O157:H7 outbreak investigations that occurred in Hawaii in May 2007. Read more >> 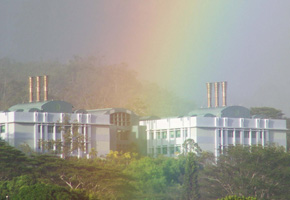 More Information and Links of Interest