Until 2015, the only proven treatment for ischemic stroke, which occurs when a blood vessel supplying blood to the brain is blocked by a clot, was intravenous (IV) tissue plasminogen activator (tPA), also known as clot buster medication. However, treatment with IV tPA alone has only a ten to thirty percent (10%-30%) success rate at fully restoring blood flow to the brain with large vessel occlusions (LVOs). LVOs, if left untreated, have the highest rate of mortality or severe disability. In 2015, several landmark clinical trials demonstrated that manual removal of the blockage within six (6) hours of symptom onset through a procedure called mechanical thrombectomy (MT) dramatically increases the chance of survival with independent level of functioning. The RAPID software can also be used to identify patients with wake-up strokes or unwitnessed onset, who would be beyond the four and a half (4.5) hour time window from time-last-known-well for tPA treatment and to exclude tPA treatment in patients with suspected stroke mimics, such as seizure, complicated migraine, or psychogenic response.

Educate providers about use of advanced imaging techniques such as the RAPID software to determine eligibility for MT up to 24 hours after symptom onset.

Educate the public about the signs and symptoms of stroke, the need for urgent evaluation at the hospital, and the availability of advanced treatments like MT. 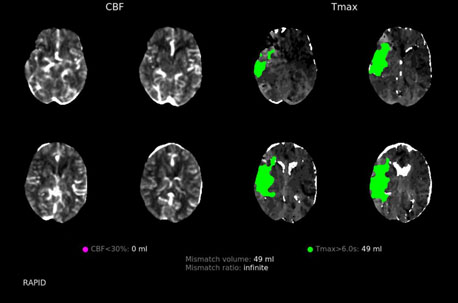