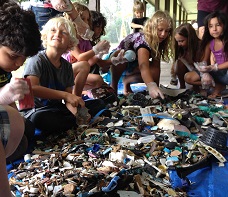 Kids in Kau sort through debris gathered along the coast of Hawaii Island.

The six grants, provided in 2013-2014, totaled $100,000 and complemented ongoing efforts by community groups that were already working to address marine debris, including debris originating from the Japan tsunami.   For years Hawaii has depended on volunteers to keep marine debris off our beaches. The selected organizations continue to help to reduce the impacts of marine debris from alien species, marine life entanglement, economic costs, and human health and safety. The awardees were:

The grant funds, were administered by the DOH, but were provided by DLNR $50,000 and a $50,000 grant from the National Oceanic and Atmospheric Administration (NOAA) Marine Debris Program.  Selected proposals reduced marine debris through beach cleanups and education activities that support ongoing habitat conservation in Hawaii coastal areas. Awardees and projects were located within the Kauai, Maui, Hawaii and Honolulu Counties with a focus on areas that typically receive the most marine debris.