Suicide is an important cause of mortality in Hawaii, in fact the leading cause of injury-related death in the state. Our most recent data shows an average of 190 deaths a year in the state, an additional 910 residents who are treated in hospitals for nonfatal attempts, and a nearly equal number (865) calls to the Hawaii Poison Hotline for suicidal exposures.

Q: Why do people attempt suicide?

A: People usually attempt suicide to block unbearable emotional pain, which is caused by a wide variety of problems. It is often a cry for help. A person attempting suicide is often so distressed that they are unable to see that they have other options. We can help prevent a tragedy by endeavoring to understand how they feel and helping them to look for better choices. Suicidal people often feel terribly isolated. Because of their distress, they may not think of anyone they can turn to, furthering this isolation.

In the vast majority of cases someone who attempts suicide would choose differently if they were not in great distress and were able to evaluate their options objectively. Most suicidal people give warning signs in the hope that they will be rescued because they are intent on stopping their emotional pain, not on dying.

A: No. Having suicidal thoughts does not imply that you are mentally ill. People who attempt suicide are often acutely distressed and the majority are depressed to some extent. This depression may be either a reactive depression which is an entirely normal reaction to difficult circumstances or may be depression which is the result of a diagnosable mental illness with other underlying causes. Or it may also be a combination of the two.

The question of mental illness is a difficult one because both these kinds of depression may have similar symptoms and effects. So whether a person who is distressed enough to attempt suicide would be diagnosed as suffering from clinical depression may vary among individuals and cultures.

A: It depends what aspect you talk about. Talking about the feelings surrounding suicide promotes understanding and can greatly reduce the immediate distress of a suicidal person. In particular, it is appropriate to ask someone if they are considering suicide, if you suspect that they are not coping. If they are feeling suicidal, it can come as a great relief to see that someone else has some insight into how they feel.

Q: What sort of things can contribute to someone feeling suicidal?

A: Depending on a person’s individual response, risk factors that may contribute to a person feeling suicidal are

Q: How would I know if someone I care about is thinking about suicide?

A: Typical warning signs which are often exhibited by people who are feeling suicidal are:

Q: What can I do if someone I care about is thinking about suicide?

Suicidal people, like all of us, need love, understanding and care. People usually don’t ask “are you feeling so bad that you’re thinking about suicide?” directly. Locking themselves away increases the isolation they feel and the likelihood that they may attempt suicide. Asking if they are feeling suicidal has the effect of giving them permission to feel the way they do, which reduces their isolation. If they are feeling suicidal, they may see that someone else is beginning to understand how they feel.

A:  Different services vary in what they offer, but in general you can call and speak anonymously to a counselor or therapist about any sort of problem in a no-pressure context that’s less threatening than a face-to-face session. Talking the situation over with a caring, independent person can be of great assistance, whether you’re in a crisis yourself, or worried about someone else who is, and they usually have connections with local services to refer you to if further help is required. You don’t have to wait until the deepest point of crisis or until you have a life-threatening problem before you seek help.

If you are in crisis or someone you know is, you can call the following phone numbers and talk to someone who can help you:

Fact: Most people think the winter holidays are a risky time, but suicides are lowest in December and peak in the spring.

Myth: Depression is always the cause of suicide.

Fact: Two of every three people who commit suicide are depressed at the time they take their life. However, alcoholism plays a role in 1 in 3 completed suicides.

Major depression is the psychiatric diagnosis most commonly associated with suicide, with about 20 times the risk found in the general population.
With more active screening and treatment, depression carries less of a stigma now, but it remains one of the big risk factors for suicide.

Myth: Teens are at greatest risk for suicide.

Fact: Teenage suicides make headlines, but the elderly are more likely to take their own life than any other age group.

Fact: Suicide is more common among whites in the U.S. than blacks, Asians, or Hispanics.

No one is quite sure why whites are at a higher risk. It might have to do with differences in social support.

Fact: A family history of depression increases the chances that a child will suffer the same by a factor of 11.  But family members and friends can also play a significant role in preventing suicide. Strong social support is known to lower suicide risk.

Fact: Exposure to others who have committed suicide may reduce some of the barriers to people thinking of taking their own lives

This link has initiated the development of new guidelines for responsible journalistic reporting. For example, journalists now typically refrain from going into detail or sensationalizing death from suicide.

Journalists often end an article with a reference to a hotline so that distressed people reading it will reach out for help rather than being tempted to emulate. 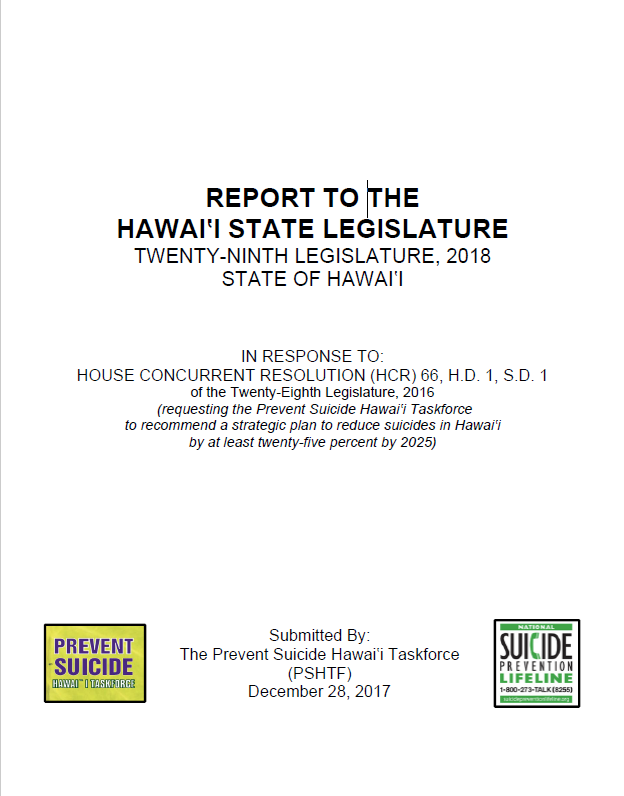 2019 – The two-day 2019 Prevent Suicide Hawaii Statewide Conference: Hope, Help, Healing was held in April.  The Conference brought together over 400 survivors, advocates, educators, service providers, policymakers, and health professionals around the issue of suicide prevention. Local, and national experts presented on a wide range of topics from increasing awareness of suicide prevention to enhancing skills to respond to those at risk, including those who have survived the loss of a loved one. Dr. Christine Moutier, chief medical officer of the American Foundation for Suicide Prevention was the national keynote speaker.  Contact Alvin C. Bronstein MD. FACEP, Branch Chief, Emergency Medical Services Injury Prevention System Branch at [email protected] for more information.

2018 – September is Suicide Prevention Month in Hawaii. Events were held statewide to raise public awareness about the topic of suicide, the impact of suicides in Hawaii, and to connect survivors with postvention services.  On Oahu, more than 900 participants, including representatives from all branches of the military and students from local schools, took part in the Walk that was held at Ala Moana Beach Park, Magic Island.  Contact Alvin C. Bronstein MD. FACEP, Branch Chief, Emergency Medical Services Injury Prevention System Branch [email protected]  for more information on how you can participate in suicide prevention public awareness events.

2016  – The 2016 Hawai’i Legislature passed a House Concurrent Resolution (HCR0066) that mandated the formation of a Prevent Suicide Hawaii Taskforce (PSHTF) subcommittee to develop a strategic plan to reduce suicides in Hawai’i by 25% by 2025.” EMSIPSB in collaboration with PSHTF will submit the completed strategic plan with recommendations to reduce suicide to the legislature in January 2018.  Contact Nancy Deeley, Suicide Prevention Coordinator for more information at [email protected]

2015 – The Youth Suicide Prevention Leadership Council was formed in April of 2015 and has 80 members (50 youth and 30 supportive adults) from across the state. The statewide, youth-led initiative was formed to: provide a youth voice for statewide suicide prevention work; provide leadership development and training for youth on suicide prevention as well as general community leadership skills; provide civic engagement and community service opportunities for youth and; connect council members with adults who will support them as leaders in their home communities. Contact Mara Pike at [email protected] for more information.

2014 – The newly formed American Association of Suicide Prevention, Hawaii, in collaboration with the DOH Injury Prevention Branch, sponsored two major events: “Out of the Darkness” walks on the islands of Oahu, Maui, Kauai, and Hawaii in September and; the first ISOS (International Survivors of Suicide) mini-conferences to bring survivor families together and to provide support.

2013-2014 – In the fall of 2013, IPCS collaborated with KHON TV to produce two Safe Messaging video PSAs targeted to
youth at risk for suicide. The PSAs can be viewed below and are now available to the public. If you would like copies of these PSAs, please contact Nancy Deeley at [email protected]

2012 – 2013: Implementation of ASIST and safeTalk trainings statewide to enhance the proportion of individuals statewide who have the skills to intervene with someone who may be at risk for suicide.

2012 – 2013 :  Implementation of “safe messaging” for at-risk youth in Hawaii.  Messages are being developed for this population based on the results of focus groups held in 2012 with youth at risk and their peers on Oahu.  Dissemination of these recommended messages will occur in 2013, based on recommendations of media to be utilized to distribute messages.

2012 – 2013: The Bullying Task Force – a coalition developed from Senator Suzanne Chun Oakland’s Keiki Caucus – is preparing legislation that will be introduced in the 2013 Hawaii state legislature to ensure that all public and private schools statewide develop trainings, policies and procedures to address bullying in their schools.

UH John A. Burns School of Medicine, Department of Psychiatry

The Prevent Suicide Hawaii Taskforce (PSHTF) is a state, public and private partnership of agencies and community groups working in collaboration to provide leadership, develop strategies, coordinate activities, and monitor progress of suicide prevention efforts in Hawaii. The PSHTF collaborates with the State Department of Health Injury Prevention and Control Section (DOH/IPCS) in planning and implementing these activities.

Meeting time and location of PSHTF: Queen’s Conference Center, Room 203, corner of Punchbowl and Beretania Streets, 3rd Thursday, every other month from 2:00pm – 4:00pm. Confirm date and location of meeting, as times and location may change.