Injury Prevention is a Public Health Priority in Hawaii

Injuries in Hawaii are responsible for more deaths from the first year of life through age 40 than all other causes combined, including heart disease, stroke, and cancer. Among residents of all ages, injury is the fourth leading cause of death and disability. The vast majority of injuries, however, are non-fatal and can lead to a range of outcomes, including temporary pain and inconvenience, disability, chronic pain, or a complete change in lifestyle.

During an average week in Hawaii:

While the greatest impact of injury is in human suffering, the financial cost is staggering. In Hawaii, medical treatment for injuries generated nearly $455 million in hospital charges. 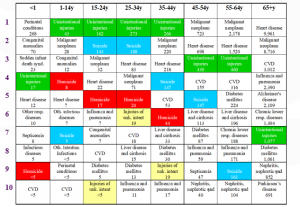 A chart showing the ten leading causes of death among Hawaii residents, click to enlarge.

Leading Causes of Injury Mortality and Morbidity among Hawaii Residents1 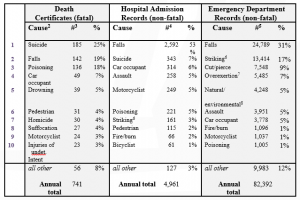 A chart showing the leading causes of injury mortality and morbidity among Hawaii residents, click to enlarge.