Learning From Our Past to Shape Our Future Florence Nightingale of Hawaii, Mabel Leilani Smyth

(In honor of Nurses Day celebrated on May 6)

”One can do more good for humanity by working among the people district nurses do, and naturally like to work among that class of people.” Mabel Leilani Smyth 1892-1936

Public Health Nursing is an organized community service rendered by graduate nurses to the individual, family and community. This service includes the interpretation for the correction of defects, prevention of disease and the promotion of health and may include skilled care for the sick in their home. Our service is divide into four distinct divisions, maternity, health supervision, morbidity (which includes non-communicable and communicable disease) and social service. 1932 definition of Public Health Nursing.

As we celebrate Nurses Day 2015, we pay tribute to our genealogy of Public Health Nursing. It is important to learn and understand where we come from to help us move forward. Mabel Leilani Smyth was the first director of Hawaii’s Territorial Board of Health, Bureau of Public Health Nursing and the first public health nurse of Hawaiian Ancestry. She devoted her entire life to taking care of others and changed the course of nursing care in Hawaii as a result.

Born in Honolulu and raised in Kona, she was Irish, English, Chinese and Hawaiian. Her father was an interisland ship captain from Ireland and her mother from Kona. She grew up speaking Hawaiian, Pidgin, and English. Her childhood was spent on her mother’s hillside Kona farm, picking and cleaning coffee, planting kalo, and pounding poi.

Her family moved to Palama, Oahu in 1907 after her father’s death. She graduated from McKinley High and began working as the nanny for the Rath family who pioneered the Palama Settlement. The Rath family had already started public health nursing at Palama Settlement in 1906. As she travelled with them to Massachusetts in 1912, they encouraged her to enroll in the Springfield Hospital Training School for Nurses. When she returned in 1915, she served as a public health nurse in Kalihi Kai where many Hawaiians lived. In 1918, she became the first director of the Palama Settlement PHN service. In 1921, she returned to Massachusetts to attend the Simmons College in Boston to study courses in public health nursing.

Her professional career spanned from Hawaii to the mainland. Here in Hawaii, she served as the President of the City and County of Honolulu Nurse’s Association, Trustee of the Territorial Nurses Association, leader with the American Red Cross Honolulu Chapter, and Board of Registration of Nurses. She also started the first public health nursing course at the University of Hawaii in 1926. She introduced Hawaii to the modern methods of public health nursing through keeping in touch with developments on the mainland such as with Jane Addams of Hull House, Chicago Settlement, attending mainland conferences and visiting health centers to observe new practices. Hawaii was the first state or territory that required formal training for employment as a Public Health Nurse.

On March 24, 1936, following a minor operation to remove a sewing needle that had lodged in her chest since she was 10 years old, Mabel Leilani Smyth died of an embolism at the Queens Medical Center. Prior to her death, plans were initiated for a building that would be devoted to professional nursing and medical organizations. Over 4000 people made contributions of over $110,000 to build the Mabel Leilani Smyth Building as a memorial to a woman who gave 21 years of service to the public health community of Hawaii. 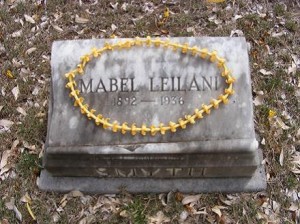