The Hazard Evaluation and Emergency Response (HEER) Office of the Hawaii State Department of Health has recently been hard at work to respond to emergencies in our community.

Last week, HEER personnel provided oversight of the response activities related to a 42,000-gallon release of jet fuel from an above ground storage tank at the Airport Service Group International (ASIG) facility on Sand Island Access Road.  Fortunately, the release did not pose a risk to drinking water and the recovery efforts focused on removing the released product to prevent impact to coastal waters. The Environmental Protection Agency served as the lead agency that worked alongside HEER to oversee the clean-up efforts. 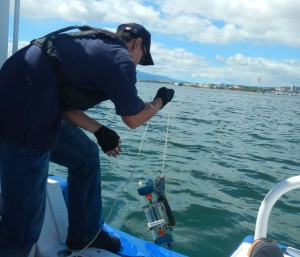 In September 2013, many may recall the release of molasses, but many may not realize the HEER office was the first to take action in responding to the incident.  (The photo above shows sampling activities during the Honolulu Harbor molasses spill.)

A portion of the revenue from the barrel tax is deposited into the Environmental Response Revolving Fund, set aside for oil spill planning, prevention, preparedness, education, research, training, removal, and remediation. The fund is also earmarked for other initiatives, including the promotion of renewable energy projects and locally grown food.