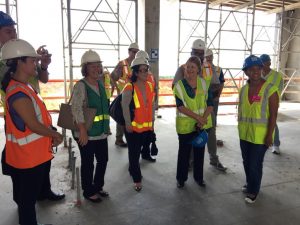 Hawaii legislators at the Hawaii State Hospital during construction in October 2019.

There is a time for everything. A season for tearing down, and a season for building up. For Hawai‘i State Hospital, 2016 was a year of demolition. A pre-demolition blessing ceremony of the Goddard Building was held in February that year, and by December, the 70-year-old building had been leveled. Only a dirt part parcel remained. By contrast, 2019 has been a year of building up. Hawaii State Hospital employees have had a front-row seat of rapidly progressing construction of the new 144-bed, high-security replacement building. Based on the current pace at which construction is moving forward, the building will be substantially completed by November 2020—two months ahead of schedule— with no safety accidents to date. Hawai‘i State Hospital patients are expected to be relocated to the new building by October 2021.

Hensel Phelps, the general contractor awarded the $140 million contract to construct the new building, has assembled an top-notch design-build team consisting of G70, KMD Architects, Baldridge & Associates Structural Engineering (BASE), AECOM, Dorvin D. Leis mechanical engineers, Masa Fujioka and Associates (geotechnical), and numerous subcontractors. A construction update and tour of the building was conducted for legislators and other government officials this month.

When completed, the new building will be a total of more than 192,000 gross square feet with four floors and a separate 3,800-sq. ft. central utility plant. The ground floor will offer rooms dedicated to rehabilitation and occupational therapy sessions, a gym for recreational therapy and an outdoor central park area contained within the secure building, a rehabilitation mall, and other shared areas for patient services. The next three floors are designated for patients and office staff, with clear lines of sight from the nurses stations to the patient rooms for enhanced safety for patients and employees. Electrical conduits, rebar and other preparations have already been completed and paving and land­scaping, including planting rainbow shower trees are part of the next steps. 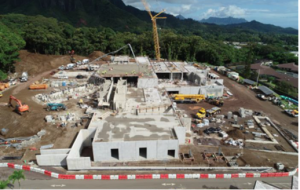 Hawaii State Hospital under construction in 2019.