On March 11, 2011, a 9.0-magnitude earthquake struck Japan and was followed by a 45-foot tsunami, resulting in extensive damage to the nuclear power reactors at the Fukushima Dai-ichi facility.  Since that time, the Hawaii Department of Health (HDOH) has monitored the potential impact to our islands through the EPA’s RadNet system, as well as performing its own radiation surveillance on shorelines, Japan Tsunami Marine Debris (JTMD), and surface drinking water systems.

The results of past and present monitoring show that residents of Hawaii have not been exposed to levels of radiation from Fukushima that would be deemed a significant health risk, and that levels are far below any level of public health concern.  This web page is intended to serve as a navigation hub to follow HDOH’s monitoring activities, as well as those of other federal, local and private entities.

The Hawaii Department of Health (HDOH) has been monitoring the situation in the Pacific Ocean, and confers with the U.S. Food and Drug Administration (FDA) and other state radiation programs regarding radiation safety in food and seafood products.  To date, FDA has no evidence that radionuclides from the Fukushima incident are present in the U.S. food supply at levels that would pose a public health concern. This is true for both FDA-regulated food products imported from Japan and U.S. domestic food products, including seafood caught off the coast of the United States. Consequently, FDA is not advising consumers to alter their consumption of specific foods imported from Japan or domestically produced foods, including seafood.

The HDOH continues to monitor the results of surveys and monitoring performed by TEPCO, as well as review scientific publications and reports from both private and public scientific institutions, to keep abreast of any potential impact on the ocean and sea life.  HDOH also continues to perform shoreline surveillance on Oahu, Kauai, Maui and the Big Island utilizing radiation detection equipment to measure levels on the sand, rocks, and any marine debris that may have washed ashore.  Results of the surveys performed since May 2011 remain consistent with normal background levels.  Normal background radiation levels near the shoreline range from 1 to 5 microRoentgens per hour.

For some time after the Fukushima nuclear reactors were damaged, we posted readings of radiation levels around the state.  There were elevated levels briefly, though they remained well below levels approaching a health risk.  We have long since gone back to normal radiation levels found in Hawaii and will therefore discontinue posting readings and updates.  Updates will be posted again if we receive information that there has been a release of some kind from Fukushima or elsewhere in the world.  We continue to monitor air, drinking water, and precipitation through EPA’s RadNet system, and will maintain periodic shoreline surveillance activities.

Air, drinking water and  rainwater samples are sent to and analyzed by the U.S. Environmental Protection Agency (EPA).  The results are posted on EPA’s RadNet website.  EPA tests what is collected to look for any radioactivity that would represent a public health risk.  You can do a search of sample results on EPA’s website here:  EPA RadNet Monitoring Search Link 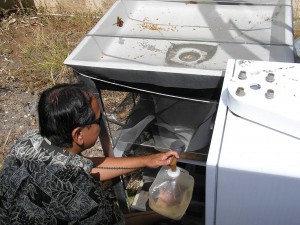 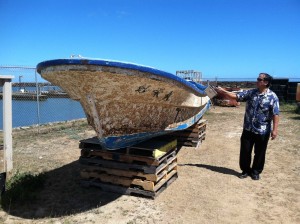 State of Washington (Department of Health) –

Fukushima and Radioactivity in Washington

Back to Radiation Section – Home Page