Posted on May 31, 2016 in All IPCS News, partnerships, suicide prevention

The Youth Suicide Prevention Leadership Council (YLC) was formed in April 2015 and just celebrated its first anniversary! The YLC serves as a vehicle for integrating youth into all suicide prevention efforts statewide. The group was formed to provide a youth voice for statewide suicide prevention work, leadership development and training on suicide prevention, civic engagement and community service opportunities, and to connect members with adults who support them as leaders in their home communities.

Over the past year, the group held bi-monthly webinar meetings, assisted in the development and production of materials used for group identification and public awareness, participated in group events and awareness activities, and attended a safeTALK suicide prevention training.  SafeTALK participants are trained to recognize a person at risk for suicide and to know how to connect them with a person trained in suicide first aid intervention or similar resources to keep the individual safe. The safeTALK training was a follow-up to the Connect training that youth and supportive adults received at the Prevent Suicide Hawaii Task Force (PSHTF) suicide prevention conference in April 2015.  Connect promotes help-seeking behaviors, participation in school and community suicide prevention presentations, and serves as a format to gain valuable leadership skills. In February of this year, the PSHTF members overwhelmingly approved a revision to its by-laws to include a youth representative to serve on the Steering Committee. 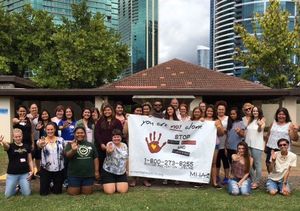 The YLC now has well over 90 members that include youth and supportive adults from across the state.
There is an on-going enrollment application process that includes an interview for membership. For more information contact Mara Pike, Pono Youth Program Manager – [email protected]