Groups Work Together To Prevent Suicide 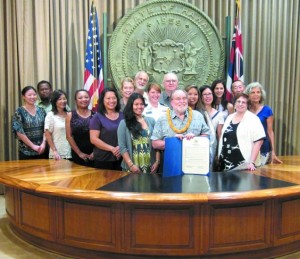 The Prevent Suicide Hawaii Task Force (PSHTF) is a state, public and private partnership of individuals, organizations and community groups working in collaboration to provide leadership for suicide-prevention efforts in Hawaii.

Hawaii has a relatively high rate of youths at risk for suicide and for self-reported attempts, according to the Centers for Disease Control and Prevention’s Youth Risk Behavior Survey, so many of these prevention activities are focused on young people. As an example, 15 percent of high school youths in Hawaii contemplated suicide in 2011, the second highest proportion in the nation.

Recently, one PSHTF member met with employees of a local company that had experienced the death by suicide of an employee on company grounds. The company wanted on-site support to assist employees in processing the incident and to ensure that all employees who wanted this assistance were able to access it. This PSHTF member was able to talk with employees about their thoughts and feelings related to the suicide and assist them in processing what they were experiencing. Helping suicide survivors is a priority of PSHTF members and is one of the aims of the conference.

Registration for the conference is still available at the door on the day of the event. For more information on suicide prevention in Hawaii, contact me, Suicide Prevention coordinator for the Hawaii Department of Health, at [email protected] or 733-9238.