HONOLULU – The Hawaii State Department of Health (DOH) in partnership with the City & County of Honolulu; the Counties of Hawaii, Kauai, and Maui; Hawaiian Lifeguard Association (HLA), Department of Transportation (DOT); and Hawaii Tourism Authority (HTA) is kicking off a new initiative to share life-saving advice on ocean safety and drowning prevention with travelers statewide. Major airports around the state will now feature prominent large-scale posters at airport baggage claims notifying visitors and residents of the near real-time website www.hawaiibeachsafety.com that provides up-to-date information on conditions at all lifeguarded beaches in Hawaii.

Ocean drowning is the leading cause of fatal injuries among visitors to Hawaii. On a per capita basis, ocean drownings are eight times more common among non-residents. In addition, for every fatal drowning there are several non-fatal drowning survivors who may have severe lifelong disability, including the effects of brain damage. Visitors are also at a much greater risk for spinal cord injury from ocean activities such as body boarding and body surfing, comprising more than 75 percent of such patients in Hawaii.

A recent survey conducted by the HTA and DOH indicated that nearly all (97 percent) of English-speaking visitors went to a beach while in Hawaii, and about half visited beaches at least four or more times during their stay. About two out of three (65 percent) of the 1,275 surveyed visitors said it was “very important” (36 percent) or “somewhat important” (28 percent) to have lifeguards present at the beaches they visited. The majority of respondents reported the presence of lifeguards make them feel safer at the beach.

Despite this widespread appreciation for beach lifeguards in Hawaii, relatively few (3 percent) of the respondents were aware of the Hawaii Lifeguard Association sponsored beach safety website, which is specifically designed to promote awareness of conditions at all lifeguarded beaches across the state. To direct more visitors to the website, prominent posters are displayed at all major airports in the state. The posters are the result of the collaborative efforts of DOT, DOH, County Ocean Safety and the Hawaiian Lifeguard Association.

“These new posters at Hawaii airports are part of the collaborative efforts of the Hawaii Drowning and Aquatic Injury Prevention Advisory Committee,” said Health Director Dr. Virginia Pressler. “Drowning is a major public health issue in our island state and building awareness about ocean safety among our visitors and residents is absolutely necessary.”

Department of Transportation Director Ford Fuchigami added, “The posters have been strategically placed near baggage claims that residents and visitors alike will notice them while they are waiting for their luggage and gain valuable information before they head to the beach. Keeping people safe is a shared responsibility and we are happy to provide the space at our airports for the posters.”

The new colorful airport posters direct people to the beach safety website which collects updated wind, wave, and other data, and posts a hazard rating for life-guarded beaches that can be used to help beach goers make informed decisions for reducing their risk of injury in the water. The site also provides up-to-date information on beach closures and active alerts.

“All of us play a role in educating our visitors about the potential risk of Hawaii’s ever-changing ocean conditions,” said Mayor Caldwell. “These new beach safety posters are a good reminder that visitors and residents should go online to HawaiiBeachSafety.com or check with lifeguards and locals before swimming, snorkeling or surfing unfamiliar beaches.”

“Hawaii’s lifeguards are the world’s best at keeping people safe when enjoying the ocean,” said George Szigeti, President and CEO of the Hawaii Tourism Authority. “The safety and welfare of Hawaii’s residents and visitors is always the top priority. We urge everyone to always use lifeguarded beaches and be informed about ocean conditions before entering the water, and the website will provide this information.”

Prevention of visitor drowning is one of the goals of the newly formed Hawaii Drowning and Aquatic Injury Prevention Advisory Committee, which began meeting in September of last year. The Advisory Committee, which is organized under the Hawaii State Department of Health Emergency Medical Services and Injury Prevention System Branch, brings together key partners invested in drowning prevention. These include the Hawaii Tourism Authority, the Department of Land and Natural Resources, the Coast Guard and military at-large, County Ocean Safety, the Hawaiian Lifeguard Association, County Parks and Recreation, the Hawaii Injury Prevention Advisory Committee, and local non-profits, which provide Junior Lifeguard and water safety programs. The committee will be expanding prevention efforts to address this important public health issue, helping Hawaii visitors and residents alike stay safe in and around the water. 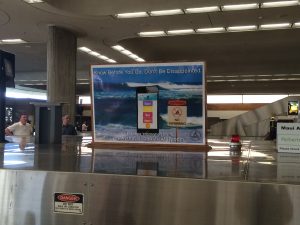 Visitors to Hawaii have an 8 times higher drowning rate than residents.

State and county agencies and the Hawaiian Lifeguard Association are working together to bring information to visitors to keep them safe in the ocean!